These Penn State World Campus students returned to school in their 40s — and their 50s and later in life — to take care of unfinished business, make a career change, and more.
By Mike Dawson

After Sharnise Johnson left Penn State in the 1990s at age 20, she went on to work for 25 years for a national telecommunications company in New York. She can soon retire with 30 years of service, but the fact that she never finished her Penn State degree has bothered her for years.

Johnson has been considering returning to school in her 40s so she can accomplish her twin goals of finishing her degree and starting a new career in cybersecurity after she retires.

Johnson took a big step toward her goals when she re-enrolled in January.

You may find yourself in a similar situation, contemplating a return to school in your 40s, 50s, or older to realize your own goals. The thought of adding this responsibility to your plate may sound challenging, even overwhelming, as school will bring new responsibilities that you have to balance with everything else you’re already handling.

There is reason for optimism, though. Many adults have already done it, and so can you.

Here are personal stories of everyday Penn State World Campus students and graduates who made the decision to go back to school in their 40s, 50s, and on.

A common situation for many adults in the U.S. is that they left college 20 or 30 years ago, and life took them on a different path that kept them from finishing their degree.

For Ryan DeGrendel, it was a medical reason. A hockey injury forced him to leave school as a mechanical engineering major, and he found a part-time job with a national retailer. That part-time job eventually led to various promotions, culminating with him supervising more than 70 stores around the country.

The long hours and rigors of travel took a toll on DeGrendel, who was diagnosed with degenerative disc disease. More painful surgeries followed, and DeGrendel reached the point where he could no longer work.

At one point, he said, he became addicted to the painkillers he had been prescribed during decades of surgeries. He even suffered a freak heart attack in 2019, and it took medical personnel an hour and 41 minutes to revive him.

The health scare was the trigger for him to go back to school.

“I wanted to finish my degree, so I climbed out of this,” DeGrendel said.

He restarted his degree in 2018, and he graduated with a bachelor’s degree in security and risk analysis in December 2020.

A degree sets a good example

Stephanie Files had unfinished business, too. She left school at one of Penn State’s campuses in 1996 when her husband joined the U.S. Army Band. Over the next several years, she was a stay-at-home mom to her three sons, and in 2007, her husband started a master’s degree online.

That’s when she decided to finish her first degree and re-enrolled at Penn State online. She marked her first milestone when she graduated in the spring of 2008 with an associate degree in letters, arts, and sciences and a renewed confidence in her academic abilities.

Years later, she returned to Penn State World Campus to finish a bachelor’s degree. She graduated in 2018 with a bachelor's in advertising/public relations, which is now the Bachelor of Arts in Strategic Communications.

“My children were getting to the ages where I wanted them to see that it didn't matter that I waited, I still was able finish my degree,” said Files. “I wanted them to understand that setting goals is important but finishing them is more important.” 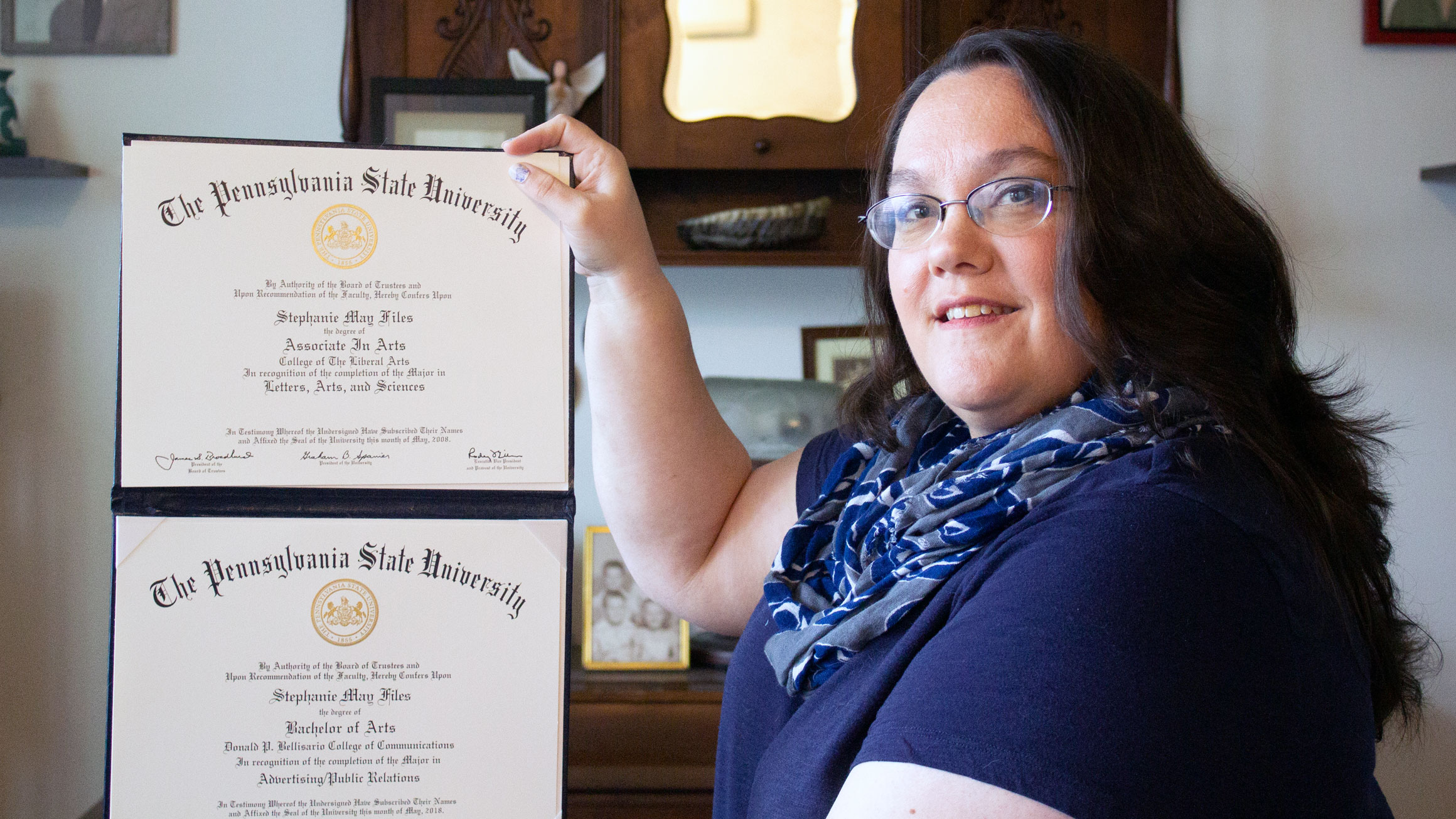 Many adults who go back to school are making a career change, and they need a degree in a new field.

Jennifer Roper Gulsrud is one of those people. After working in finance and accounting in the private and public sectors, she said she realized that she preferred working for the government and decided to make a career change. But to do that in her mid-40s, she said, she knew she needed to earn a related degree.

In 2017, Roper Gulsrud enrolled in the Master of Public Administration program through Penn State World Campus and was soon able to leverage her ongoing education for the position of business and finance officer for the King County, Washington, Metro System.

In the role, Roper Gulsrud, who is now 47, creates, tracks, and reports on the budget of the King County, Washington, bus system and supports various superintendents in the organization.

“The MPA program gave me the confidence to apply for this position while I was still earning my degree,” said Roper Gulsrud, who graduated in fall 2019. “I know I have the ability to move further up the ladder, should I choose, and I think I'll be well-suited because of my Penn State World Campus degree.”

Despite having a 30-year career in administrative and operations management, Berlaunder Barnes said she felt ashamed of not having a college degree and always worked extra hard to prove herself.

Barnes decided to go back to school, but said she knew that she needed to start with small, attainable goals. In fall 2017, Barnes graduated with an associate degree in business administration and management. The following semester, she re-enrolled to pursue a Bachelor of Science in Organizational Leadership.

“I wanted to enhance the skills and knowledge I already had,” said Barnes, 53. “I also feel that no matter what I'm doing in my life, it’s important to be a good leader and a good follower.”

Barnes graduated from the organizational leadership program in fall 2020 and said her next educational goal is to earn an MBA.

When it’s your turn to restart your degree

Mary Thomas joined the Air Force after leaving college in the early 1980s without deciding on a major or a way to pay her tuition.

Thomas went on to have a 22-year military career, retiring in 2006 as an E7 Master Sergeant. She even had completed two associate degrees in the military, and later fulfilled a lifelong dream of attending culinary school and working as a chef for six years.

Thomas returned to college in 2017, enrolling in the bachelor’s degree program in organizational leadership. She graduated in summer 2020 at age 55.

“From the beginning, when I contacted admissions and asked how I could get back in after 30-some years, until this final semester, I’ve been encouraged by staff members, advisers, professors, and even some classmates along the way,” Thomas said.

Removing the roadblocks impeding your success

Something was holding Elinor McNeel back from getting her degree: math.

In grade school in the 1950s, she couldn’t do long division. Her struggles continued into high school and led to her quitting college in 1972.

When she enrolled in Penn State World Campus more than 40 years later, she found her troubles with math had a name, dyscalculia, which makes basic arithmetic hard.

Penn State waived her math classes to accommodate her disability, and that allowed her to finally make progress on completing her college degree.

“I remember my dad sitting with me with the arithmetic book for hours, and I couldn’t get it,” she said. “I just couldn’t figure out why.”

She earned an associate degree in the summer of 2019, and she could have a bachelor’s degree in law and society as early as 2023.

It’s never too late to go back to school

When Bev Molnar was 57 and 10 years shy of retirement, she was facing a pending job loss. That’s when she decided it was time to pursue her dream and check something off her bucket list — a professionally focused master’s degree.

She’d put off returning to school for years to raise her son and care for her spouse.

She enrolled in the Master of Professional Studies in Strategic Communications, and she said online learning is the perfect fit for her.

“Now I’m convinced that online study is the best way for working professionals to get the advanced education they need,” Molnar said. “While timelines and due dates may be flexible, the instructors are accessible and hold students to the same standards as those in on campus.”

What are you waiting for?

Everyone has their own motivation for taking the leap of going back to school, and hopefully these stories show how achievable this goal is.

Find out more about going back to school in one of the more than 175 degree programs offered online through Penn State World Campus.