A dozen members of the U.S. military will earn their master’s degrees from Penn State this weekend thanks to a pair of special partnerships between the military and the University.
By Matt Caracappa

They are two of twelve members of the U.S. military who will earn their master’s degrees from Penn State on Saturday, August 15, thanks to a pair of special partnerships between the military and the University. 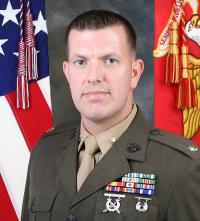 Schneider and Lt. Col. Matthew Bain will each graduate with a Master of Supply Chain Management after completing their degrees through a special program between the Marine Corps, Penn State World Campus, and the Smeal College of Business.

Schneider, who is stationed in Quantico, Virginia, said learning new ideas and techniques outside of the military structure will allow him to stay at the forefront of innovation.

“There’s some overlap in what you learn, but you get exposed to different things than you’d get from a military-run graduate school,” he said. “The biggest takeaway was all of the exposure to innovation in supply chain management. That’s huge for the Marine Corps to see how academia and industry can work together for us to pull into whatever we’re doing.”

Bain, who now serves as second-in-command of a military school with more than 100 faculty and staff that manages advanced logistics and training and education for the entire Marine Corps, said he can bring new ideas from the Penn State program to his post.

“As an educational institution, we need to stay plugged in to the state-of-the-art for our curriculum,” he said. “Being able to influence our program with what I learned from Penn State will help make better logistics leaders for the future of the Corps.” 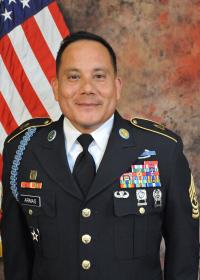 Like Bain, Armas will serve as an educator after being one of ten U.S. Army sergeants major to earn a Master of Education in Lifelong Learning and Adult Education, thanks to the partnership between Penn State World Campus, the College of Education, and the U.S. Army Sergeants Major Academy Fellowship Program.

After completing their degrees in one year, fellows will teach three years in the Sergeants Major Course, which prepares the military’s next generation of leaders with the skills they need on and off the battlefield.

Armas said the curriculum taught him how to engage with soldiers differently.

“I've gained a great understanding and respect for thinking about what you're going to say and how you're going to present the material for people to get that critical thinking going,” he said. “You learn to make that human connection and know how to guide the conversation to where it needs to be. You let them feel comfortable and build themselves a connection between peer to peer.”

“It’s a great example of distance learning at its best.”