Bachelor of Arts in Law and Society 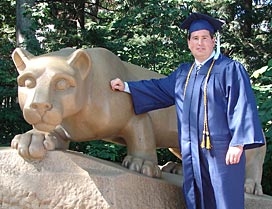 On graduation day I really did feel that I was a part of the University and that I had a real connection with the other students.

Brian Grimsley wanted to attend law school, but with a business to run and no bachelor's degree he knew that getting there would be no easy task. He struggled to find a school that fit his needs, until he found Penn State's online bachelor's degree in law and society. "My busy lifestyle and long work hours made it impossible to attend regularly scheduled classes," he says. "The convenient online program gave me the opportunity to work at my own pace. I completed my work in the evenings and on weekends."

A spring graduate, Brian and his family traveled to University Park to attend the ceremony. Although he had never before set foot on Penn State’s campus, he immediately felt at home when he arrived. He received his diploma along with other students from the College of the Liberal Arts and even had his picture taken at the Nittany Lion Shrine. "On graduation day I really did feel that I was a part of the University and that I had a real connection with the other students," he says.

Just a few days before graduation Brian found out that he was accepted into law school, marking the realization of his dream. His Penn State professors, many of whom have legal backgrounds, helped him with every step of the application process, writing letters of recommendation and answering his questions. "I thought that I would never hear from my professors, since I wasn't seeing them in a classroom every day, but it was really just the opposite," he says. "They were all great about answering e-mails quickly and were available to talk on the phone when I had questions. I never would have gotten that kind of interaction in a big classroom setting."

Brian's family was also able to benefit from his Penn State online experience. Both of his children, who attend Big Ten universities, took World Campus courses over the summer and transferred them to their home institutions. "We would always be looking over each other's papers and helping each other study," Brian says. "I wanted to show them just how important it was to get a college degree and how much work it took to get one, especially from a school like Penn State."