Associate in Arts in Letters, Arts, and Sciences 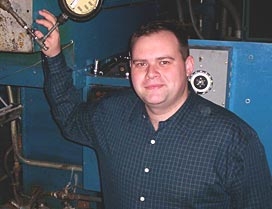 The information you learn sticks with you for years because you learned it yourself. I now have the intellectual horsepower I need.

"I would have to say that my children were the inspiring force behind my pursuit of higher education. When I was on evening shifts, I wasn't able to see my children at all. I hated it and decided to earn my degree, thinking I would be more valuable to my company and hopefully be promoted to a position that was a straight day job," said Penn State student Shawn Sharpe.

The Homer, Louisiana, resident found Penn State to be a place where he could further his education while still working full-time. Sharpe's associate degree in letters, arts, and sciences is certainly paying off; he now works as a project manager for a local packaging and manufacturing company, which has paid for both his associate degree and the courses he is taking toward the bachelor's degree in organizational leadership.

Because of that financial support, Sharpe regularly answers to calls of "Penn State" from his co-workers at the plant.

"My company was extremely helpful in this matter, offering to pay for any class in which I earned a grade of C or better," he said. "I've always made it a point to learn anything anyone would teach me about my company's equipment and production abilities. Basically, we're investing in each other."

Sharpe found Penn State's online program while flipping through a book on campus-free college degrees. He immediately recognized the Penn State name and concluded that its accreditation and quality courses provided the edge over other online programs.

"The most useful thing I have learned are the labor and industrial relations skills," he said. "I can now interact with both the workers and management and understand both perspectives."

Although he made many sacrifices to obtain his degree, Sharpe would not change anything; the hard work he put into his courses gave him a greater appreciation for the value of an education: "The information you learn sticks with you for years, because you learned it yourself. I now have the intellectual horsepower I need, but I wouldn't give up the years of working that got me here."