Associate in Arts in Letters, Arts, and Science 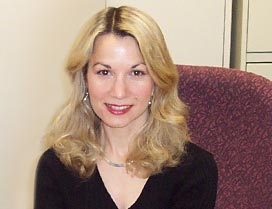 Everyone here in Colorado is impressed that I got into Penn State because they know what a great education it offers.

Connie Schlosberg grew up in Pennsylvania but moved to Colorado before she began taking classes at Penn State. Her husband's career in the Air Force took her around the country and onto a common career path for military wives — as a secretary in the base offices.

"Getting a job with the military is pretty much the norm around here," she said.

Schlosberg grew comfortable in her job and eventually wanted to move up to the position of program manager, which requires a bachelor's degree. After getting her feet wet at a local university, she visited the base's education office and discovered Penn State's online program.

"I got a list of colleges offering complete degrees online and one of them was Penn State," she said. Online classes are a good fit for Schlosberg's lifestyle because they can go with her as she moves from base to base around the country or even around the world. Like many students returning to school after a long absence, she was nervous about handling the transition but said it has worked out well so far.

"I've become quite the planner," she added. "I have a daily calendar where I can cross off the boxes and keep track of my assignments." After receiving her bachelor's degree in letters, arts, and sciences, she hopes to pursue her love of writing full-time.

"I am looking into technical writing because I have a background in it, but I also like creative writing," she said. "I have many goals; it's just a matter of finding a balance between them."

Although she traveled more than 2,000 miles away from Happy Valley, Schlosberg has found a way to connect with her home state while getting a top-notch education that will help her pursue her dream.

"Everyone here in Colorado is impressed that I got into Penn State because they know what a great education it offers."