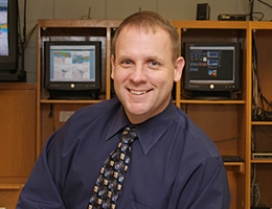 The exceptional faculty passed on their wisdom to me, and I am returning the compliment by teaching it to the next generation of scientists. That's education!

As a young boy, Richard (Rick) Schmidt was a "dinosaur nut." He would also sit at his bedroom window at night and watch thunderstorms. Rick cannot tell you where this fascination came from, but it spawned a lifetime of interest in the geosciences.

As an adult, Rick created an awarding-winning advanced earth and space sciences curriculum for the Upper Dublin School District, outside Philadelphia, Pennsylvania. What he set out to create was a conduit through which he could funnel his life's passion and bring respect for the geosciences.

"I spend a considerable amount of time outdoors, and you would be amazed at what you can learn by just looking up, asking questions, and hunting for the answers. The course I teach is not based out of a textbook but on physically going out and looking for ideas."

Rick wanted to better understand the weather conditions he observed when he stepped outside. He knows meteorology is a key component of the sciences he teaches, but he was not an expert. So he turned to Penn State's online undergraduate certificate program in weather forecasting to "ramp up" on this particular science. He is applying the advanced concepts in meteorology he learned in his Penn State online course work to his high school’s advanced earth and space sciences curriculum.

"The exceptional faculty passed on their wisdom to me," said Rick, "and I am returning the compliment by teaching it to the next generation of scientists. That’s education!"