This student’s job: Get PPE to agencies during the COVID-19 pandemic

Luci Labriola-Cuffe was studying public health preparedness and put her degree to use helping a New York county respond in the coronavirus outbreak.
By Mike Dawson

Penn State alumna Luci Labriola-Cuffe said she could hear the desperation in the voices of the people calling her for personal protective equipment.

They needed masks and goggles at the hospitals. The nurses at the nursing homes needed the same. Funeral directors needed body bags.

Since March, Labriola-Cuffe has worked on supply logistics for the Westchester County Department of Emergency Services in New York as it responds to the COVID-19 pandemic. Her job is to help get PPE supplies to the 400 agencies and organizations in the county that need them.

Labriola-Cuffe also saw the disaster response from another perspective — as a student studying public health preparedness. Through Penn State World Campus, she was working on her master’s degree and graduated May 9.

“I love helping people. I always have — it’s just something in my blood,” Labriola-Cuffe said. “I feel if we didn’t come in to work, people would suffer.”

Labriola-Cuffe worked in hospitals for 12 years after she graduated with a bachelor’s degree in exercise and sport science from Penn State in 1996. She also had suited up as an EMT and firefighter and eventually decided to work full-time in emergency services. 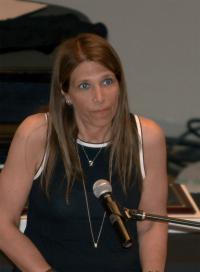 Labriola-Cuffe is the chief of fire training for the Westchester County Career Fire Academy. She oversees training for all paid and volunteer firefighters within the county. But her job responsibilities have been shifted during the pandemic to working full-time in the county's Emergency Operations Center.

She said Westchester County is a large enterprise. Its population is just less than 1 million, and it has 11 major hospitals. There are 45 police departments, 58 fire departments, 50 EMS agencies, more than 100 skilled nursing homes, adult care facilities, and many special-needs homes whose workers and residents all need protection.

“This is something that’s so unprecedented. This is much more global than I’d imagined,” Labriola-Cuffe said. “I’ve learned a lot of disaster planning, thinking ahead. We try to plan for what’s going to happen next. I have taken the disaster planning, coordination, and communication learned in my courses to a whole new level throughout this pandemic.”

Labriola-Cuffe was on the ground in March helping to handle logistics in New Rochelle, a city in Westchester County, when it was the first hotspot of the coronavirus outbreak on the East Coast.

As the county liaison with New York State’s incident management team, she saw the crisis up close. She met with representatives from Gov. Andrew Cuomo’s office and the New York State Department of Health.

At the time, New York State Police were running swab kits to the state lab in the Albany area. She said 400 to 500 people a day were being swabbed, but the lab could only run about 200 tests a day.

“Since then, I’ve been working 13-hour shifts, six days a week,” she said. “I’ve had disaster training like no other.”

Labriola-Cuffe said Westchester County saw sharp increases in the number of deaths in April, and PPE was as important as ever. Cold-storage trailers served as additional morgue space, and she procured supplies for funeral homes.

“Funeral home workers need the proper gear to embalm the bodies of the victims,” she said. “It’s something I never could have imagined in a million years that I would be working on.”

For the past three years, Labriola-Cuffe was enrolled in Penn State’s master’s degree program in homeland security, with the double option in counterterrorism and public health preparedness. It’s offered online through World Campus and taught by Penn State faculty from the College of Medicine in Hershey and Penn State Harrisburg.

In addition to spending the past few months working in the pandemic response, Labriola-Cuffe completed the capstone project that was a graduation requirement.

Prior to the pandemic, she had been working to develop protocols to have EMS and police integrate their response to an active shooter. Her capstone project was about requiring stop-the-bleed tourniquet training in schools in preparation for active-shooter scenarios.

“It’s been a whirlwind,” she said of her last semester.