Joshua Liu is a member of the U.S. Army and Team USA Taekwondo.
By Hannah Pollock

Editor’s note: The FISU Executive Committee has postponed the 2022 Summer World University Games in Chengdu, China. The games were set for June 27 to July 3, 2022, but are now postponed until summer 2023.

A Penn State World Campus student is set to compete on the world’s stage this summer when he represents Team USA in China. Joshua Liu is a business student, active U.S. Army soldier, and Taekwondo champion who will participate in the Summer World University Games.

Liu started competing in Taekwondo at age 10 before winning his first national title and joining Team USA at 13 years old. The sport has taken him all over the world, including to Belgium, Puerto Rico, and the Dominican Republic. Liu qualified for the Games at the Collegiate Team Trials held in February in Colorado. 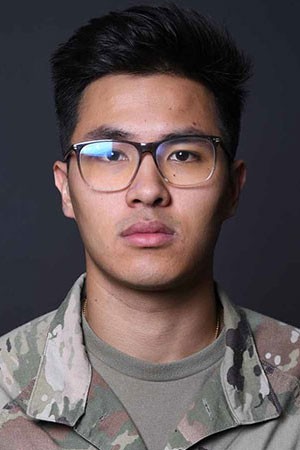 “It’s a great accomplishment to be able to represent the United States Army and Penn State; it’s an amazing thing that I can truly be proud of,” Liu said. “To be able to be a soldier/athlete while being a student, it’s a lot of work, but I feel it is setting me up for success in the long run.”

Liu, 22, joined the Army out of high school, netting a special contract in 2019 through the Army’s World Class Athlete Program (WCAP) that allows him to travel the world to represent the Army at tournaments and championships. The program sends soldier athletes to the Olympics, a longtime goal of Liu’s.

It was also in the Army that Liu learned about the flexible learning opportunities available through Penn State World Campus, through his drill sergeant during basic training.

“He mentioned how they support the military and how much he enjoyed it,” Liu said of his superior’s Penn State experience.

His superior’s recommendation and the opportunities offered through Penn State World Campus cemented Liu’s decision to enroll in fall 2021. Liu said serving on active duty does not leave time to attend in-person classes, but online courses help him fit continuing his education into his day-to-day schedule as a 19D Cavalry Scout. Liu uses military tuition assistance and Penn State World Campus’ Military Grant-in-Aid, which he said are big parts of helping him earn his degree.

Liu, who is stationed at Fort Carson in Colorado Springs, Colorado, hopes to finish his course work in three years before putting his degree to work by opening his own business.

The Bachelor of Science in Business program explores idea generation, opportunity analysis, and business plan development while offering a broad exposure to accounting, management, and marketing. The program, offered in partnership with the business schools from 17 of Penn State's campuses, allows students to tailor their program to fit their career aspirations. Students can choose from options including accounting, entrepreneurship, financial services, health services, management and marketing, or even an individualized plan developed with their academic adviser and program coordinator. Liu is enrolled in the entrepreneurship track.

Ultimately, Liu wants to compete and win at the Olympics, but after an injury sidelined him for a couple of years, he relishes every achievement.

“I decided I wouldn’t live in my past accomplishments. My top achievement will always be the next achievement,” he said.

Learn more about Penn State World Campus opportunities for members of the military and their families.