Student makes an impact for veterans through IT internship

Michelle Wiemer is pursuing her Bachelor of Science in Security and Risk Analysis.
By Jessie Nguyen

UNIVERSITY PARK, Pa. — As a military spouse, Penn State World Campus student Michelle Wiemer has grown to adapt to an ever-changing environment that allows her to explore different lines of work and meet people from all walks of life. Through her journey, she has recently discovered a career path that excites her the most: security and risk analysis and information technology.

Previously a personal fitness trainer, Wiemer coached clients who worked in a variety of occupations — from civil engineers to stay-at-home moms, and from National Security Agency employees to communications professionals. In listening to their stories, Wiemer was most inspired by how her clients were making an impact in the world.

“It got me wondering, is this something I can see myself doing?” she said. “This is what led me to looking deeper into the IT world and what parts of it I found fascinating, as it can be something that I can bring to the world in addition to what I can do already.”

Wiemer decided to make a career change and is currently pursuing a Bachelor of Science in Security and Risk Analysis and a minor in information sciences and technology online through Penn State World Campus. She will earn her degree in December. 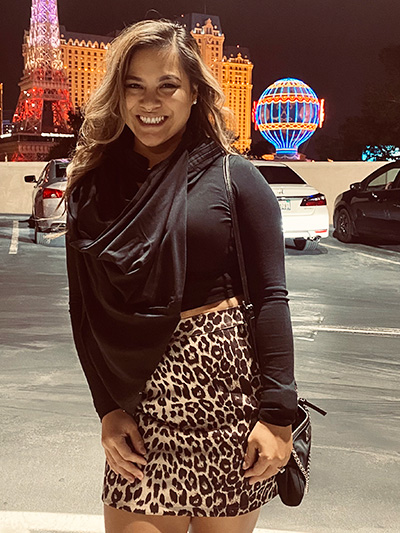 “Information technology kind of goes with everything, and it’s everywhere these days with any curriculum and with any career,” she said. “I think that it will support any career that I would get into.”

The ability to complete her studies online is extremely beneficial for Wiemer — whose spouse serves in the U.S. Armed Forces — as it gives her the versatility a military spouse needs.

“It’s definitely the convenience of having a job or internship and completing tasks on your own time, but you have to really want it to be able to sustain something online,” she said. “I’m pretty good with making myself accountable when it comes to tests and things I need to do.”

This semester, Wiemer is working as an information technology security analyst intern for the U.S. Department of Veterans Affairs. She currently works in the IT department and homes in on IT security in a group of four during this nine-month program where her tasks differ every day. Having been a resident of Nevada for the past five years, Wiemer said she is proud to be starting her tech career in “an entertainment city” like Las Vegas, which isn’t necessarily known for its IT scene. More so, the internship has allowed Wiemer to not only apply what she learns in her courses, but also make an impact for populations that are near and dear to her and her family: veterans, military personnel making the transition to becoming veterans, and their families.

“We’re creating security policies and I’ve just created a privacy policy for one of the websites that’s being used right now,” Wiemer said. “I’m also working on user agreements and in tandem working with back-end security with the group; it’s only been a month, but it’s been awesome.”

Wiemer’s Penn State course work has prepared her for success in her internship. She particularly enjoyed the security risk and analysis courses that involved labs in which to practice security infiltration, analyze security threats, and identify where they stem from.

“My courses have helped me a lot, such as with understanding the material and how to read privacy policies, how to develop them, and why and which state matters,” she said. “My intro to programming class definitely helps me on the back end when creating websites and I need to be able to read where all the buttons and vulnerabilities are.”

She has also enjoyed using security information and event management (SIEM) tools such as Enigma Glass in one of her labs earlier this year.

“I got to analyze real-time data to monitor threats while collecting and reporting on log information on instances such as ransomware detection, credential harvesting, and abnormal account activity,” she said. “I thought that was not only super cool, but I can see how impactful it can be.”

Wiemer encourages students who have similar interests and backgrounds to be patient, because building a skill set in an ever-evolving industry takes practice.

“So that's going to be a 'student for life' situation,” she said. “The beauty in that is that you move up to next-level opportunities and knowledge expansion, away to new borders of your educational growth.”