Student helps bring remains of missing veteran back to U.S.

Mark Chesney is a 25-year veteran of the U.S. Navy.
By Hannah Pollock

More than 82,000 Americans remain missing from World War II, the Korean War, the Cold War, and the Vietnam War. A Penn Stater has helped bring one of the missing home after a trip to Laos.

The families of Prisoners of War (POWs) continue to search for missing loved ones and can seek help through the U.S. Defense POW/MIA Accounting Agency (DPAA), which works through missions to find those who are unaccounted for and honorably bring them home.

Penn State World Campus Graduate Certificate in Hospital and Health System Preparedness student and retired Navy Senior Chief Hospital Corpsman Mark Chesney participated in one of those missions in 2019. He heard of the program through friends who had served and wanted to use his skills to help bring a sense of closure to families.

Chesney recounted his experience in honor of POW/MIA Day on September 16, which recognizes the lost and missing.

“We are bringing somebody home and returning them with their family, repatriating someone who died overseas,” said Chesney, who served 25 years in the Navy. “That family member will never have closure until they know 100% without a doubt that their loved one is back home.”

Answering the call to serve

The DPAA learns about missing service members from their families, whose stories are often elevated to the agency through members of Congress. The DPAA will investigate the story, interview local witnesses, and evaluate other information to piece together a search area. After receiving approval from the United States government, the host country’s government, and the landowner of the search area, the DPAA will send a group of service members, civilians, and archeologists to complete the search.

The team trains for a week at the agency’s headquarters in Hawaii and then flies to the host country.

Chesney’s group traveled to Laos in southeast Asia. They landed in the capital city of Vientiane before taking a four-hour helicopter flight to the middle of the jungle, where they spent the next two months searching.

Chesney was a part of Mission 20-1 LA Recovery Team 2 of about 36 service members and a couple of civilian archaeologists. They worked with nearly 200 local villagers to locate an F-4 pilot who crashed around 1971–72. The search area, near the Ho Chi Minh Trail, had two reported crash sites close to each other. 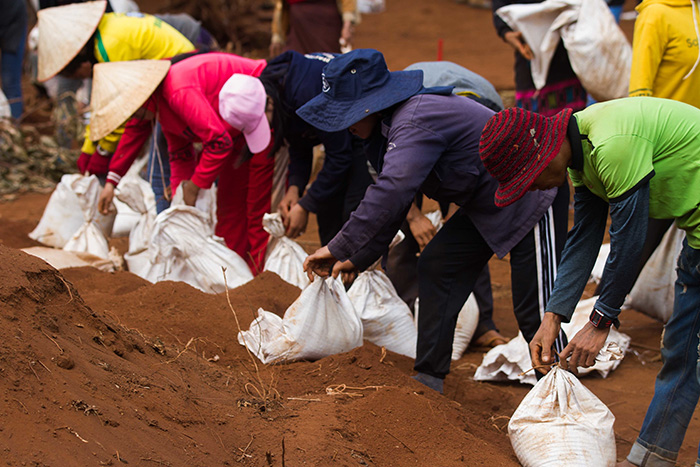 The team worked six days a week at a dig site, led by the archeologists. They dug up to two feet into the ground and formed a human chain with the villagers to pass buckets to those waiting with handmade sifting screens.

They were looking for bone fragments or anything that could be from an airplane.

“We were looking for harnesses, maybe pieces of the helmet, anything that would indicate that this is where the pilot is,” Chesney said.

Searching does not come without its hazards, he said. The jungle climate and terrain, along with wildlife like snakes and scorpions, present natural dangers during excavation. Manmade explosives from the war also remain undetonated and buried in the ground. Chesney said his group found, and properly extracted, a 500-pound bomb.

Chesney participated in the archeological search, but if there was an illness or injury, he was able to provide medical support for both his team and the locals who helped them.

Not every mission ends in success, but Chesney’s team found the bones of the pilot who went down.

“It is a very humbling experience when we travel overseas looking for a lost brother or sister who never made it home,” Chesney said.

Once suspected remains are located, they travel back to Hawaii for months-long DNA testing, analysis, and eventually family notification. But before the remains leave the host country, the team holds a repatriation ceremony. Team members wear their dress uniforms and salute the flag-draped coffin at the flightline.

When the plane carrying the remains is preparing to land in Hawaii, it circles the base in a specific formation, notifying those on the ground that someone is returning home. They take a moment to stop and honor the one who made the ultimate sacrifice.

“It’s hard to explain because I’ve had friends who were killed in Iraq and Afghanistan. They made it home, but not alive. Here we are, almost 50 years later, we’re able to bring somebody home,” Chesney said.

Chesney has been a Penn State fan since he was a kid and always wanted to take courses from the University.

After his Navy retirement in 2020, Chesney wanted to continue his education and enrolled in the Graduate Certificate in Hospital and Health System Preparedness, offered online through Penn State World Campus and the Penn State College of Medicine. He said he may pursue a Penn State master’s degree after finishing the certificate in spring 2023.

Chesney shared his experience in Laos during a Penn State webinar presentation in February 2022. To watch his presentation, start the video at 43:30.

About the cover photo: