Along with the 5,600 students who have military ties as either service members, veterans, or military dependents across all of Penn State’s campuses, including World Campus, Penn State faculty and staff members who serve or have served in the military are an ever-present and important part of the Penn State community. Below is the story of one dedicated Penn State World Campus support staff member who shared her story for Military Appreciation Week.

Navy Corpsman Maggie Kwok was a teenager in a Houston, Texas, high school wondering what path she would choose to pursue after graduation. Her friends were entering the workforce or attending college, and her family expected her to pursue higher education.

“It just didn’t feel like I was ready for college,” Kwok said. “I wanted to do something different.”

After a conversation with a peer who shared his Navy recruiter’s contact information, she joined the Navy as a corpsman in 2002. A corpsman, sometimes called “Doc” as a sign of respect, provides a wide range of medical care to sailors and marines.

“A corpsman within a Marine Corps, you are everything,” she said. “It’s a team of us. We learn from each other and ask each other for help.”

Kwok served a temporary duty assignment in Guantanamo Bay for six months in 2003. She was then stationed in Twentynine Palms, California, with Combat Logistics Battalion 7 and deployed to Iraq from September 2006 to April 2007. 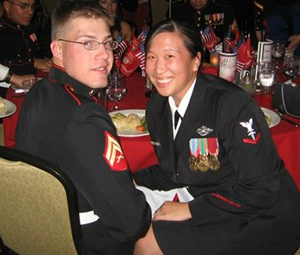 Kwok left the Navy in December 2007 to pursue her bachelor’s degree at the Penn State University Park campus. She and her husband chose the school after hearing high opinions from nurses with whom Kwok worked. Kwok completed her application while deployed in Iraq.

She graduated in 2011 wanting to work for the U.S. State Department or another government entity, but an ongoing government shutdown deferred her plans. At the suggestion of a supervisor in the Office of Veterans Programs, Kwok applied for a job at Penn State World Campus to gain experience.

Almost 12 years later, Kwok still works for World Campus as a disability coordinator. She also served as adviser to the Penn State Veterans Organization, where she was the student president for two years. She credits the Navy for helping her develop leadership skills.

“Those can be translated across whether you are military or civilian,” she explained.

One thing Kwok said she wishes people understood about her as a service member is that she doesn’t necessarily fit the stereotypical or expected “mold.” She said she sometimes faces questions or disbelief of her service and must convince people to believe her.

Kwok also noted that transitioning out of the military to civilian life is difficult, which can leave veterans questioning who they are outside of their service.