Meet this student, the youngest member of the Montana House of Representatives

19-year-old Mallerie Stromswold is getting her political science degree online while serving as a lawmaker in her home state.
By Susan Burlingame

Mallerie Stromswold tries to be a typical teenager. Hanging out with friends. Taking college courses. Enjoying her big family. Working as a nanny to make some extra money.

But Stromswold, a Penn State World Campus student majoring in political science, is anything but typical. At 19, she became the youngest member of the Montana House of Representatives.

A Billings, Montana, native, Stromswold said her interest in politics began at age 11, when she “tagged along” with her older sister, who was doing fieldwork for a statewide campaign. What began as an “interest,” however, turned to ambition several years later when, as a high school junior, she spent a week as a page in the Montana House of Representatives.

“That week was a pivotal point in my life,” Stromswold said. “I met a lot of people who told me, ‘You’re smart, you’re interested, you should do this.’ I saw the need for young women in the legislature, and I found out there was an open seat, so at 17 years old, I just decided to go for it. Plus, I thought it would be extremely cool.”

Though born and raised in Montana, Stromswold said she always wanted to attend college in Pennsylvania. Her father lives in Pennsylvania, and her sister went to Penn State, also majoring in political science. The bachelor's degree in political science program that is offered online is administered by the College of the Liberal Arts at Penn State's University Park campus.

“I always thought I would attend Penn State in person, but the election changed all that,” she said. “I realized a college education in political science couldn’t compare to the actual experience I would have by running for office. Even if I didn’t win, I would learn so much from campaigning.” 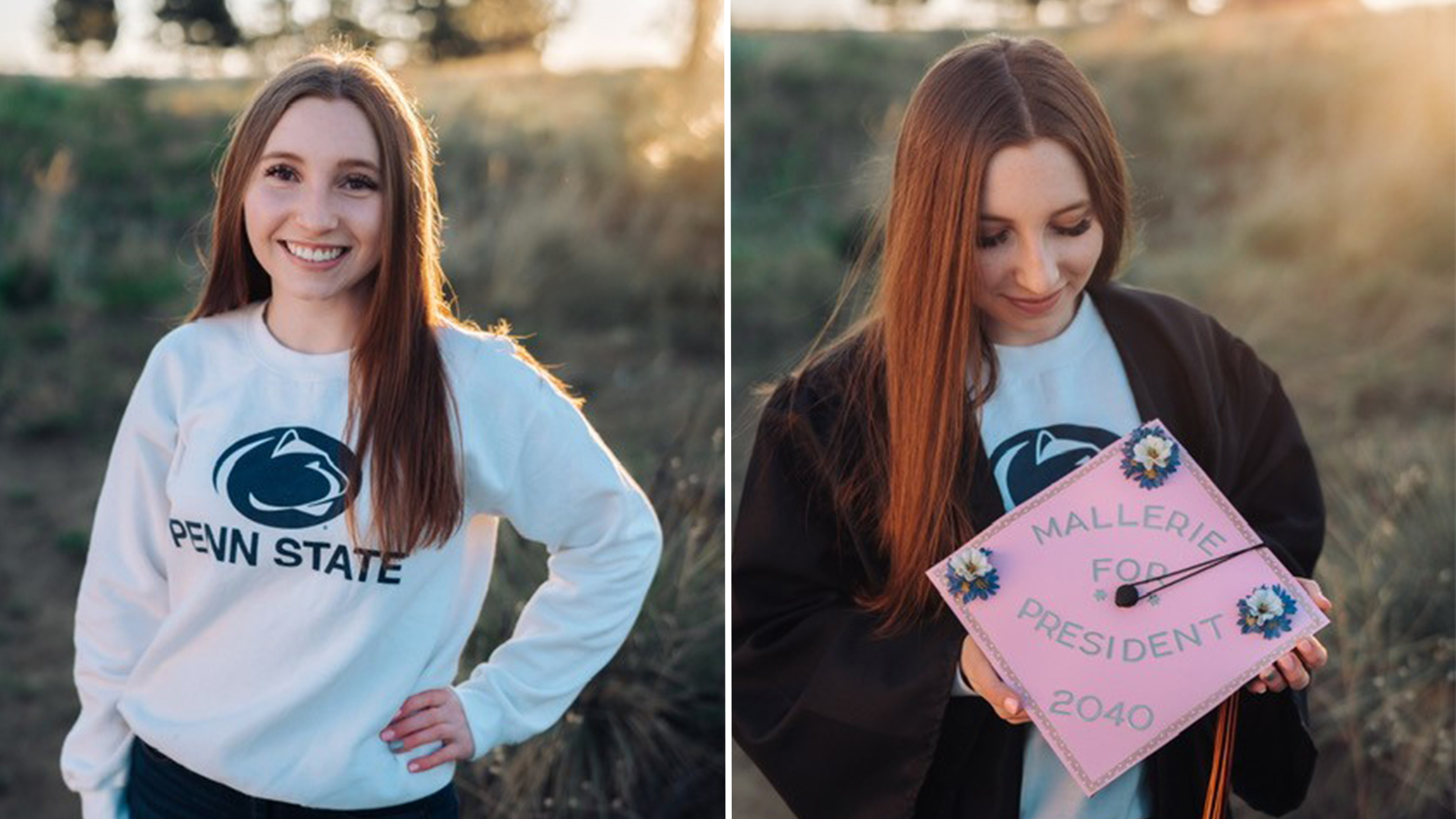 Mallerie Stromsword has been a Penn State fan all of her life.
Tracy Moore Photography

Penn State World Campus provided the perfect option. Stromswold began her studies in August 2020 and was elected just three months later. She was sworn into office in January 2021.

“My first semester at Penn State was really tough,” she said. “And at that point, I was campaigning about 20 hours a week, nannying for two different families, and taking 16 credits. I had to restrict my study time to the weekends.”

The following semester, when the House of Representatives was in session, Stromswold reduced her credit load but continued to pursue her degree. Because of the way the Montana legislature works — one 90-day active session from January to May every two years in the capital of Helena — Stromswold will be able to add to her course load in her off semesters.

“When I was in Helena during the legislative session, I served on two of the busiest committees — judiciary and health and human services,” she explained. “Every day, I would show up anywhere between 6 and 8 a.m. and be in committee until about 1 (p.m.). Then there’s a daily floor session followed by another committee session. And then you do it all again the next day. It’s kind of like Groundhog Day.”

In addition to committee and other session work, Stromswold considered bills, listened to public testimony, and perhaps most importantly, stayed connected to her constituents through calls, text messages, and emails — a task that will continue for the duration of her two-year term.

“It has been so helpful to be part of World Campus,” she said, noting that her classes are asynchronous and largely self-directed. “It was tough to get used to, but I figured it out. One of the most interesting parts has been reading discussion posts from my fellow political science students. I would have my ideas on issues, but other students’ thoughts on those issues would sometimes cause me to change my mind. It has helped me with my actual work.”

“Considering the way Mallerie excelled as a student and brought a well-informed perspective to discussions, I am quite sure that she is, and will continue to be, a force to be reckoned with as a member of the Montana House of Representatives,” said Gregory Kruczek, assistant teaching professor of political science. “I’m looking forward to seeing what her future holds.”

Stromswold hopes to graduate in 2024, attend law school, and perhaps make a career out of serving in politics.

“I enjoy the work, which is challenging but worth it,” she said. “I have had the opportunity to learn so much, and I changed for the better just by being part of it. It would be hard to give it up.”

It seems Stromswold has no intention to “give it up.” She will soon be campaigning for re-election, and the possibility exists that she will hold a much higher office in the future. Her high school graduation cap revealed her aspiration: “Mallerie for President 2040.”