Hanley completed his course work while on tour in foreign countries.
By Hannah Pollock

After a hurricane devastated the island of St. Maarten while Jeffrey Hanley was on tour with the U.S. State Department, he knew he wanted additional skills and knowledge to better serve those around him.

Now a Master of Business Administration graduate, Hanley has applied the skills he learned in the Penn State online MBA to aid Ukrainian refugees at the U.S.-Mexico border. He used his knowledge in supply chain, budgets, communication, and more as he helped coordinate the transfer of tens of thousands of Ukrainians who fled after Russian invaded.

Hanley entered the workforce during the Great Recession and decided to pivot his career path. He took the Foreign Service Officer Test, noting that he didn’t understand what it was or the significance. Hanley passed, and at age 23 began his first tour in west Africa with the U.S. Department of State.

Twelve years later, Hanley is the Management Officer at the U.S. Consulate in Tijuana, Mexico.

Seeing a need and wanting to do more

Hanley was stationed in the Caribbean when Hurricane Irma pummeled St. Maarten in September 2017. Hanley assisted in evacuating those on the island to neighboring Puerto Rico. About a week later, Hurricane Maria hit Puerto Rico and other Caribbean islands.

“Throughout that process and the logistics that were involved in it, and the diplomacy that was required, I came to realize I needed to know more,” Hanley said. “And that’s the day I decided I needed to go back to school.”

“Penn State runs in the family,” he said.

Hanley chose Penn State World Campus and began courses in January 2018, completing course work in the evenings during his tours in Curacao, Haiti, and Mexico.

The Master of Business Administration is a 48-credit program, led by the internationally ranked Smeal College of Business and offered online through Penn State World Campus. Students can choose from 27 concentrations such as finance, strategic leadership, and project management.

As the war in Ukraine continued, U.S. officials said the country would take 100,000 Ukrainian refugees. However, at the time of the announcement there was not a clear process of entry. 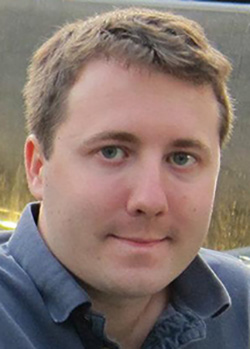 Hanley said Ukrainian refugees arrived and camped out at the San Ysidro Port of Entry between California and Mexico. What started as a group of 500 eventually grew to 10,000 people. After receiving orders from Washington, Hanley led his team through the process of moving the refugees north of the border.

Hanley explained that he has a more-tempered approach to dealing with the current humanitarian crisis than before he enrolled in the online MBA program.

“A lot of that comes back to the skills and abilities I developed,” he said. “I really do love my country and believe that we have the power to make a difference and do what’s right in the world.”

Applying what he learned

Hanley said his supply chain management course strengthened his skills in stacking resources. Hanley, along with the State Department, U.S. Border and Customs Protection, and various non-governmental organizations, moved more than 22,000 Ukrainians over two weeks, including 4,000 during the final 72-hours. Officials worked through the night to ensure every eligible person got through.

Hanley explained how if one part of the massive partnership is flawed, the entire operation can fail. Hanley also said he improved his speaking and written communication skills and his understanding of power bases, budgets, and how to effectively communicate a message. He shared his gratitude for one of his self-described hardest courses, “Managing in the Digital Economy.”

“That course taught me how to write the most concise and direct-action memos of my life,” Hanley said. “We don’t have time; this has to be done now, but you can’t do it alone. You must have these partners with you to get this accomplished and so you’ve got to convince these people. That ties into the last class I took, which was ‘Power and Influence.”

Hanley finished his MBA in spring 2022 and plans to continue implementing the knowledge he acquired through the program.

“It really honed my skills and gave me a broad perspective,” Hanley said. “I’ve been able to employ almost everything I’ve learned almost immediately on my job.”