Wondering what you could do with a master's degree in higher education? Maybe you could advance your career like this zookeeper did.

Career changes, which are sometimes unexpected, can happen at any point in life, and they can happen for many different reasons. Over the course of the average person’s working life, it is estimated that they will switch careers between five and seven times. The idea is daunting and feared by many. But there is always a positive side to the story. The need for a career change can lead to new possibilities and a happier, more productive future. Nathaniel Schierman, zookeeper at Cleveland Metroparks Zoo, knew he was going to have a career change when he and his family decided to move to an area that didn’t have a zoo. To make for a smoother transition, Nathaniel chose to pursue a Master of Education in Higher Education through Penn State World Campus. 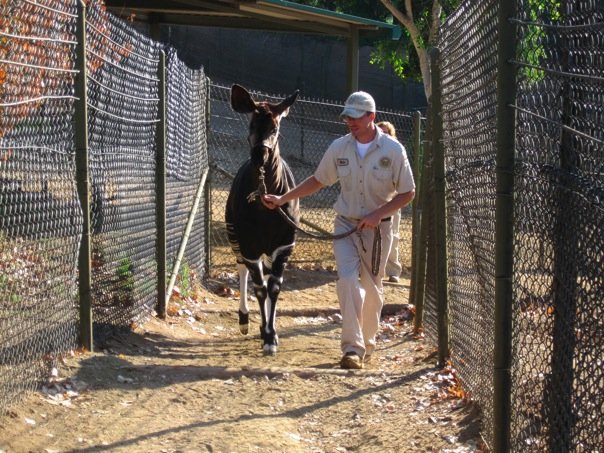 Nathaniel is expected to graduate from World Campus in April of 2019. In addition to his course work and full-time job as a zookeeper, he works part-time seasonally doing data analytics for the NFL. He also has two small children that demand a lot of attention.

“Luckily, I have a very patient and understanding wife,” he said.

In order to successfully manage his work, school, and family time, he adamantly follows a schedule. Generally, he arrives home from work, eats dinner with the family, and then sequesters himself in his room to complete his school work.  If possible, he tries to make time to play with the kids. On weekends, Nathaniel will stay up late to do more involved work, like research or writing papers, and then try to spend the day with his family.

“It’s been tough on all of us,” Nathaniel said, “but having clear goals for the future helps keep everyone (including the kids) on board.”

Current Career – At the Zoo 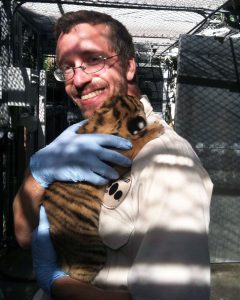 Even though Nathaniel had always been fascinated by animals, zookeeping wasn’t his first pursuit. He began his career working in television in the NBC Page Program and then worked for NBC at both the New York and Burbank offices. While in L.A., he attended a career event at the L.A. Zoo and re-ignited his interest in animal care. He began his venture into zookeeping by volunteering at a local wildlife refuge and eventually pursued his associate degree in animal science. Since that time, he has worked at many zoological parks, including the San Diego Zoo and Walt Disney World.

In his current role as a zookeeper at Cleveland Metroparks Zoo, Nathaniel is responsible for the daily husbandry, specialized care, and training of the animals in the zoo’s hospital. This can include animals that are new to the zoo and going through quarantine, animals that are about to leave for other facilities, or animals that are sick/injured and in need of specialized care. He is also responsible for training interns and new employees and ensuring accurate and up-to-date record keeping on all assigned animals (e.g. diet consumption reports, medication, changes in health/behavior).

Nathaniel also works seasonally for a company that does data analytics for the NFL.

“I work all of the home games for the Cleveland Browns (trust me, I have heard all of the jokes already),” he said.

His job includes inspecting and ensuring the proper installation of RFID chips (similar to GPS) in all of the player shoulder pads (chips also go to the refs and in the footballs). Throughout the game, he logs everything that happens during gameplay, including huddle starts, ball snaps, tackles, penalties, runs, and interceptions, from the kickoff to the final whistle. Then, all that data goes to the coaches, the physicians, and the announcers, in order to improve the work that they do. A few NCAA teams are also using analytics, including Ohio State and Michigan State.

“It is something I would love the opportunity to do for PSU, if they so choose,” said Nathaniel. 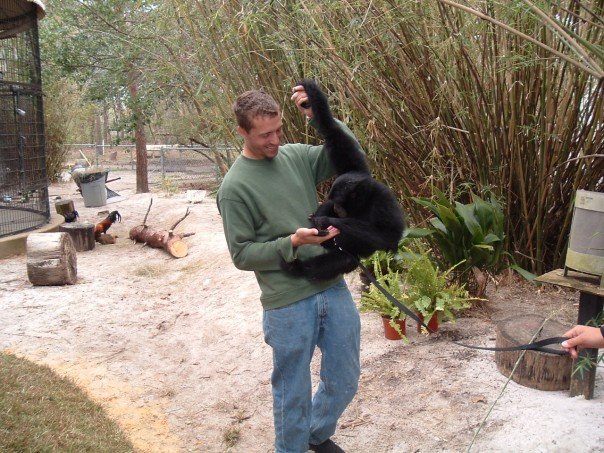 Upon graduation in April of 2019 from Penn State World Campus, Nathaniel plans on transitioning from a career in zookeeping to a career in higher education. His primary reason for getting a degree in higher education is to make the most of his career change. His wife grew up in State College and is eager to get back home to her family and her roots. Because there aren’t many animal-related work options in Centre County, he chose to pursue his M.Ed. in hopes of finding a position within Penn State. Even though he hasn’t yet had the opportunity to put what he has learned to practice, he is confident that the knowledge he has gained in the Master of Education in Higher Education program will help him excel in higher education administration.

How World Campus Has Helped Him Achieve His Goal

Penn State World Campus provides a unique opportunity for people interested in studying all across the globe. While earning a degree is the end goal, students also have a plethora of opportunities to become involved in the Penn State community. Nathaniel explained, “What I did not expect, and what is a bonus, is how readily I would be accepted into the Penn State community. Even as a distance learner, I have had so many opportunities to connect with fellow students as well as Penn state faculty and administration.”

Through his time at Penn State, Nathaniel has built connections by attending conferences both locally and online, and he even had the privilege of attending President Barron’s tailgate and enjoying a Penn State football game from his suite at Beaver Stadium.

“Through amazing experiences like these, it did not take long for me to go 'all in' for Penn State and form more of a connection and feeling of fellowship as a distance learner than I had for my alma mater as a conventional undergrad.”