Fulfilling Their Dreams: These Students Get Penn State Degrees

UNIVERSITY PARK, Pa. — When Ashish Kohli left India for the United States at age 17 not having finished high school and with only $40 in his possession, he wasn’t sure what the future held for him.

Emily Bowmer found herself needing a master’s degree to advance in her field and was at a loss for where to find the right university to help her move forward. 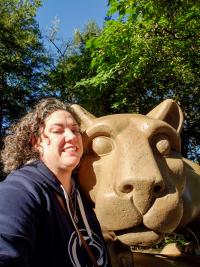 As of this weekend, their futures look brighter: Kohli can say he is a college graduate, and Bowmer will have the credential she’s wanted to progress in her career.

The two will share their personal journeys on Friday, August 9, 2019, during the Penn State World Campus Graduation Celebration, an event for graduates and their families at the Penn Stater Hotel & Conference Center.

“I never thought I would be able to go to college,” said Kohli, 32, who will receive a bachelor’s degree in finance. “I was lucky enough to be accepted, and now I’m graduating.”

Kohli said Indian culture prioritizes higher education, and a degree was always his goal. However, getting established in his new country was difficult and the goal seemed to be an unattainable dream. For instance, the first job he had was at a gas station, and the only way he had to get there was by walking, two miles one way.

Kohli credits his wife for directing him back to his original goal. He started by completing his GED in 2013, and next, he completed an associate degree at a community college in Delaware by taking night classes because he worked during the day. He enrolled in Penn State World Campus in 2017, taking 2 to 3 courses at a time to finish his bachelor’s degree.

He also credits his wife for shouldering the work at home, where the couple have two young daughters.

“I wouldn’t have been able to do this without her,” said Kohli, who works as a regional account manager for Axalta Coating Systems, a global coatings manufacturer that is headquartered in Philadelphia.

Bowmer will receive a master’s degree in higher education, her second degree from Penn State. She called her World Campus experience a "homecoming" because she also attended the University Park campus for her bachelor’s degree, graduating in 2001.

She had been working as an academic adviser, a job that requires a master’s degree. When it came time to find a university that offered the right credential, she was ecstatic that World Campus offered just what she needed.

“I knew that the quality of education would be excellent,” said Bowmer, who lives in Amarillo, Texas. “Since I didn't live in Pennsylvania, I could still attend Penn State and pursue the degree that I wanted.”

Bowmer said she had a wonderful experience from the outset, such as when she first met the faculty in the higher education program. She said it was like an “instant connection” and they gave her “a great feeling of support.” It carried her through to graduation.

And that’s why she is bringing her husband and two children as well as her mother, sister, niece, and nephew here to celebrate with her.