A promise made: 76-year-old pursuing degree after overcoming learning disability

In grade school in the 1950s, Elinor McNeel couldn’t do long division. Her struggles with math continued into high school and led to her quitting college in 1972.
By Mike Dawson

UNIVERSITY PARK, Pa. — At age 76, Elinor McNeel isn’t letting her learning disability hold her back from getting her college degree.

In grade school in the 1950s, she couldn’t do long division. Her struggles with math continued into high school and led to her quitting college in 1972.

More than 40 years later, when McNeel enrolled in Penn State World Campus to finish her degree, she found the culprit had a name — dyscalculia, a brain disorder that makes basic arithmetic difficult. She’s since been able to complete an associate degree and is working toward a bachelor’s degree.

McNeel will talk about her life experiences, including overcoming her disability, in a Q&A session at University Park titled “Exploring the intersectionality of race, disability, and ageism.” The talk will be held from 2–3 p.m. on Tuesday, October 22, in the Foster Auditorium of Pattee Library and will be livestreamed online.

“I remember my dad sitting with me with the arithmetic book for hours, and I couldn’t get it,” she said. “I just couldn’t figure out why.”

At the time McNeel left college, there was no such thing as the Americans with Disabilities Act, a federal law that prohibits discrimination based on one’s disability and provides those with disabilities the right to accommodations. It became law in 1990 and is rooted in the Rehabilitation Act of 1973.

McNeel left college a year before the Rehabilitation Act came into effect, and she has wondered what her life would have been like if she had found a way to overcome the learning disability.

Her siblings were successful, and she felt she never measured up to them. Her brother was an aerospace engineer, and her sister was a psychologist.

McNeel was a civil rights advocate — she participated in marches and supported the Black Panther Party during the civil rights movement. Later in her life, McNeel worked in real estate and was a legal assistant.

When she retired in 2012, she decided to try again to finish her degree — a “bucket list item,” she said.

McNeel started in the fall of 2014 and made the dean’s list the next semester. Penn State waived her math classes to accommodate her disability, and she completed her associate degree in the summer of 2019.

Her bachelor’s degree, in law and society, could come as early as 2023.

“It’s an accomplishment,” McNeel said. “It’s a promise I made to my dad and myself. He used to tell me it’s never too late.” 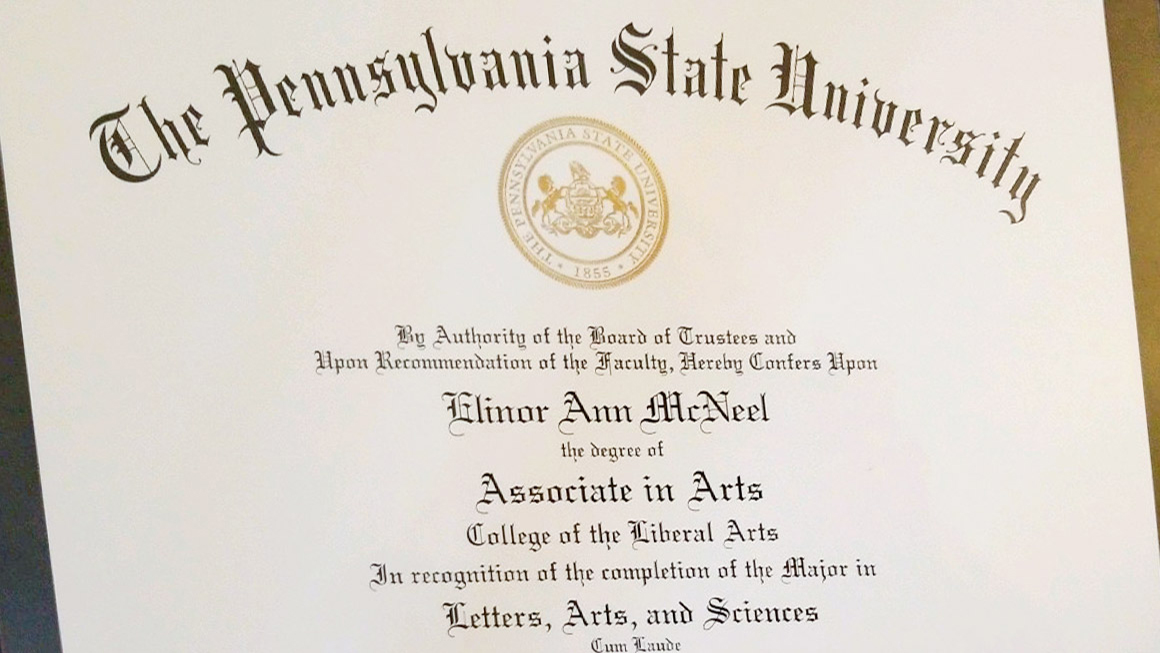