Rebecca Liebman says it's not too late for her to get her degree.
By Susan Burlingame

After years of stops and starts, 52-year-old Rebecca Liebman has finally earned her bachelor's degree. 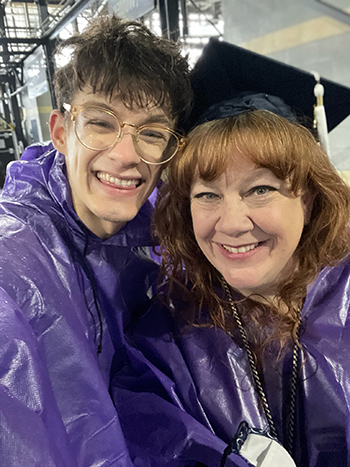 Liebman graduated during Penn State's spring 2021 commencement on May 9. She earned her Bachelor of Science in Criminal Justice online through Penn State World Campus.

A single, working mother of four — 22-year-old twins, a 20-year-old, and a 16-year-old — Liebman said she had no interest in higher education until her children came along.

“I hated high school and had horrible grades. I thought I would never go to college,” she said. “I was married at 18 and divorced by 19, married again and divorced again, which is my version of the school of hard knocks. When I started having children with my third husband, though, I realized how important a college education was.”

That’s also when Liebman began re-evaluating her own life.

“I barely graduated from high school, but I did so without ever really cracking a book,” Liebman said. “I realized I was just underchallenged, and that’s when I decided to make education fun and exciting for my kids.”

In doing so, Liebman found she had a new perspective on higher education. In 2007, when her twins were 8, she entered an online program and earned her associate degree in information technology.

“The program was not ideal, but I graduated with a 3.93 average and realized I just never applied myself before,” she said. “Once I got that taste for learning, I knew I wanted a bachelor’s degree. Unfortunately, the school of hard knocks was still knocking on the door.”

Now a single mother, Liebman put her plans on the back burner until 2015, when her children were older and more independent.

“I asked my kids what they thought about my going back to school, and they all said ‘absolutely, Mom!’" she said. "I wanted to go to a reputable school this time, though, and that’s when my son, Carter, said I should go to Penn State.”

Carter, who will graduate in June 2021 with a Bachelor of Science in theater and psychology from Northwestern University, did some research and told his mother that Penn State World Campus degrees were identical to in-person degrees. That information, plus knowing Penn State was a world-class university, was enough to get Liebman to apply. Though most of her associate degree credits transferred into the criminal justice program, she knew it would take several years to complete her degree. 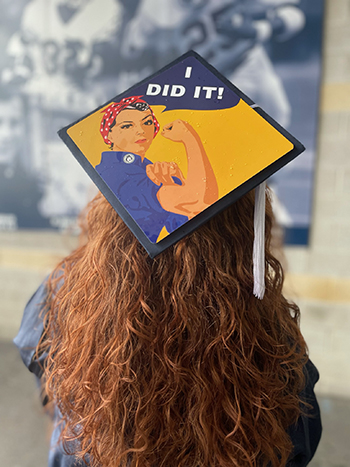 “The World Campus experience has been amazing,” Liebman reflected. “Though I lived in Florida when I started the program, moved to the Greater Chicago area in 2019, and frequently spent time in my home state of Tennessee, I never missed a beat.”

“The professors understand that [World Campus students] have jobs and kids, but they also have extremely high expectations,” Liebman continued. “Still, I found them to be very approachable. In fact, I have never gone more than 24 hours without a professor giving me a response to a question.”

As Liebman progressed through her degree program, she realized she would be graduating in 2021 — the same year that Carter was graduating from Northwestern. Even though the ceremonies were planned for different weekends, Liebman said she didn’t want to take away from Carter’s accomplishment. Carter disagreed.

“He told me it would be an incredible honor,” Liebman said.

“Watching my mom struggle to prioritize school while working a full-time job and juggling four kids served as a constant reminder of how privileged I was to have a traditional educational experience — COVID-19 notwithstanding,” Carter said. “My long nights of studying in the library felt trivial compared to her homework sessions after coming home from a full day of work and homemaking.”

Long before Penn State opted to have in-person commencement ceremonies, Liebman was determined to come to University Park to celebrate. Before May 9, her only in-person exposures to Penn State were when she stopped at Penn State Berks to get her student identification card and when she cheered on the Nittany Lions at the Citrus Bowl in 2019.

“Every time they played the fight song, I was in tears, thinking, ‘I can’t believe this World Campus student is at a Nittany Lion football game,’” she reminisced. “I have become a Nittany Lion through and through. Now the only time we are a house divided is when Penn State plays Northwestern.”

What’s next for Liebman?

“My kids have encouraged me to go to law school, and getting a law degree is not out of the realm of possibility,” she said. “Carter is considering the (Law School Admission Tests), and he thinks I should take them, too!”

“I am constantly in awe of my mom’s ability to persevere and stick it out through the toughest of circumstances,” Carter said. “She's taught me a resiliency I don't think I could have made it through college without. Getting to celebrate passing these hurdles with her has made my year.”

“Even if it means graduating the same year as your child, it’s never too late to earn your degree,” Liebman concluded. “Overall, World Campus has been phenomenal. It took me six years plus the two years I spent getting my associate degree, but if I could have one potential student read this story and realize it’s not too late, that would mean the world to me.”